Although competition forms part of the motivation for entering a Festival, we cannot stress strongly enough that they are not cutthroat events.  We know, based on feedback from clubs who have entered festivals, how much they enjoy performing to a new audience and socialising with likeminded-people.

Festivals also provide an opportunity to learn both from the adjudicators and from each other.

Within the SCDA the One-Act Festival is the national competitive festival which Edinburgh district has participated in since its inception. To enter, a club has to be a current SCDA member.

There are two categories

The Open festival, open to all groups,

The Youth Festival, confined to teams of performers under-18years old.
This event has three stages. Only the Open festival has a British final

All the performances are reviewed by an independent adjudicator, different at each round who gives a public assessment and awards the trophies.  The Festivals are held at a central venue and spread over a number of nights.
We welcome non-competitive entries at all festivals for clubs who don’t wish to compete but would still like to experience the fantastic atmosphere and fun to be had.

The Scott Salver Competition
If a club is premiering an original play in the festival, the author is eligible to enter the Scott Salver competition with the play, not the performance, being judged by a panel of readers

Running over a longer time scale this allows team to present more traditional plays. Again the performances are reviewed by an independent adjudicator who gives a private assessment and awards the trophies.

The only proviso being that the SCDA logo and or reference to your membership should be included on the flyer/poster.

Monologue Competition For individual members or club members in this two tier competition. This has Performance and Writing categories.

Entry forms, rules and guidence may be found on th SCDA National Site

● Do send Drama news details of your next production and copy to HQ as well .

● Do you have an anniversary coming up? Why not write a wee piece (350 words) for Scene magazine and send us a photo.

● Edinburgh clubs: get in touch with Thom Dibdin for his Annals Of The Edinburgh Stage if you have news you’d like to share with a broader audience – about a forthcoming show or any drama matter - http://thomdibdin.co.uk/ 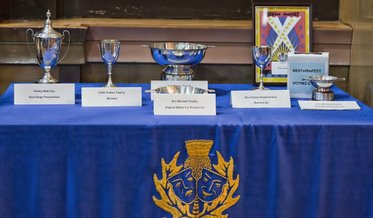